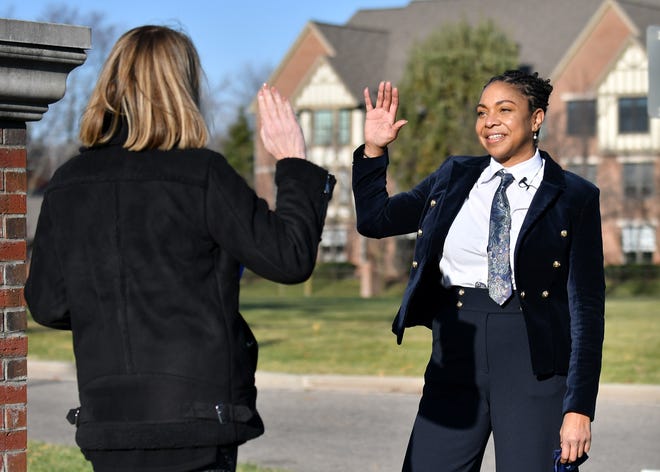 The members of VVA9 congratulate our friend, Darci McConnell, on her appointment to serve on the Grosse Pointe Park City Council.

Public relations executive Darci McConnell made history Wednesday when she was sworn in as the first African American to serve on the Grosse Pointe Park City Council.

McConnell was appointed Nov. 12 to fill an open seat after the resignation of Dan Grano. She took the oath of office Wednesday afternoon in a ceremony outside city hall.

“I’m grateful and honored and look forward to working with my new colleagues and serving the citizens,” she said.

McConnell said she “always had an affinity for local government” and was inspired by others in her family, including her grandfather Leonard Robert McConnell, who was the first Black chairman of Michigan’s parole board.

“It’s a great day in Grosse Pointe Park, which demonstrates that we’re a welcoming, spirit-successful and diverse community,” Mayor Robert Denner said. “I look forward to working with Darci.”

McConnell is the most recent African American to break racial barriers in the Grosse Pointes. In 2018, Sierra Leone Donaven  was appointed to a seat on the Grosse Pointe Farms City Council, serving until losing her bid for a full term in the November 2019 election.

Earlier this month, Joseph Herd, who was the first Black man appointed to the Grosse Pointe school board in January, won election to a full term.

Civil rights advocates say the service of Herd, Donaven, Thomas and McConnell signals an increasing spirit of racial diversity and inclusivity in the Grosse Pointes.

“She is the first African American to serve on the council,” said Bowens. “It’s important for several reasons. One is the African American population is the largest minority group in Grosse Pointe Park and the five Grosse Pointes. It really is about time that we have the representation in the five Grosse Pointes’ most diverse neighborhood. That makes it historic. “Your stories live here. Fuel your hometown passion and plug into the stories that define it.

Bowens said while it is a “great day in the Park (and a) great day in America,” there is still work to be done in ensuring racial and ethnic diversity is displayed in other areas of public serve in the Grosse Pointes.

Bowens said the elevation of McConnell and the others is the result of the work that has been done by the Grosse Pointes-Harper Woods NAACP and others for the last few years.

McConnell is president and CEO of McConnell Communications Inc., a public relations company she has owned and operated for more than 20 years . Her expertise is communications strategy, crisis management, media relations, relationship building, marketing, advertising and political consulting. McConnell also is an adjunct journalism professor at Wayne State University.

A University of Michigan graduate, McConnell is a former reporter for The Detroit News and past president of the Detroit chapter of the National Association of Black Journalists.

“Ms. McConnell is the first African American to serve, so her installation will become a memorable part of our community repository of significant moments,” Hodges said. “Given the issues we face today, she is abundantly qualified to help navigate forward in a manner we can all be proud of, and I couldn’t be more grateful for the opportunity to serve with an individual of Ms. McConnell’s caliber.

“GPP is a very diverse community and it is starting to be represented within our leadership. We are finally starting to identify as the very diverse town that we are, four ladies, one being black,  and a brown guy are much different than all of our previous councils,” Relan said. “The support for these diverse changes is seen throughout the town, by a majority of all the residents, regardless of color.

“The Park has been making great strides lately in inclusion and equity. In June, Council unanimously approved a Human Rights Ordinance, which extends legal protections to LGBTQ individuals, and just last month, an ad-hoc group was named to explore forming a Council Diversity and Inclusion Committee,” said Fluitt. “We had many well-qualified individuals apply for appointment to the vacant Council seat. The candidates provided detailed application information and then went through two interviews.

“Ms. McConnell was able to articulate a solid professional background, community engagement, experience working with city government, and an understanding of Council processes.

Councilwoman Lauri Read said, “I am looking forward to serving with and working with Councilmember McConnell. She was a standout candidate in a pool of outstanding candidates.”

Read added McConnell brings “an important voice and perspective” to the council.

“Ms. McConnell’s background and communication skills will certainly be an asset to our council and our city,” she said. “After COVID, our aging infrastructure and our pension funding are key issues. Ms. McConnell demonstrated her awareness of these matters during the interview process and I believe she will bring her skills to the table as we tackle them.”