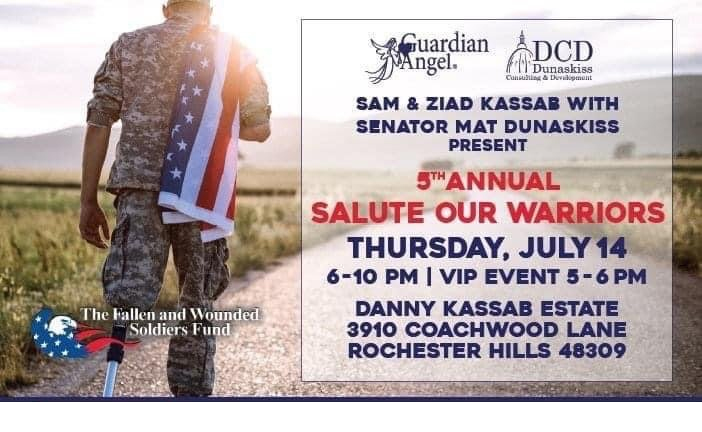 Vietnam veteran Richard White has been honored for his tireless efforts in establishing more than a half dozen scholarship and assistance programs for students in Detroit and across the state.

White received the recognition at a Salute to Warriors event put on by Guardian Angel, the Fallen and Wounded Soldiers Fund, DCD Dunaskiss, and state Sen. Mat Dunaskiss.

“I am humbled by and grateful for the recognition, but I’m even prouder of how Chapter 9 has supported students and helped them pursue higher education and careers,” White said. “We want to make a difference.”

A former board member of Detroit Chapter #9 of the Vietnam Veterans of America, White helped create scholarships for Detroit Public Schools students, JROTC members, students pursuing building trades, students who are descendants of Vietnam Veterans, and cadets of the Michigan Wing – Civil Air Patrol. The chapter has awarded more than $62,000 in scholarships to 43 students since 2019.

White currently serves as the chapter’s liaison to the Fallen and Wounded Soldiers Fund for the joint Vietnam Veterans In Need assistance program, which he helped establish.

“Our annual Salute Our Warriors event was a special night where we honored three veterans who served their country with honor while raising over $100,000 for the Fallen and Wounded Soldiers Fund,” explained Ziad Kassab, who hosted the event. “Equally important as the dollars raised for the mission was how we were able to re-ignite the patriotic spirit of so many of our guests and let all the veterans in attendance know how much we appreciate them.”

“Captain Richard White is no different. Serving in Vietnam was one of the toughest wars to come home from as those men and woman did not get the same welcome home as other soldiers,” he added. “It was especially important to have him there so he and all Vietnam vets could be recognized for their service to our country.”

Michigan has more than 200,000 Vietnam-era veterans, according to the National Center for Veterans Analysis and Statistics and the U.S. Census, making it the largest veterans group in Michigan.